The seventeenth century French philosopher Renee Descartes famously declared ‘ I think, therefore I am’. With these words, he founded a world view which dictated that the brain and the body were separate. Like taking your car to the mechanic for faulty brakes, you could take the ‘broken part’ of the body to be repaired or removed if needed.

Descartesian logic spawned allopathy – the current dominant system in Western medicine. It can be argued that allopathy is principally built on pharmacological principles. It is the only medical system in human history that operates under the notion of a body-mind split. By this I mean that unlike Chinese or Ayurvedic medicine for example, allopathy tends to treat a health problem without considering the inter-face between body, mind and spirit. 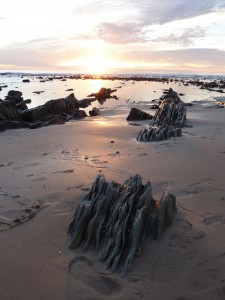 Telling someone ‘Don’t worry, it’s all in your head’ is neither technically nor scientifically accurate.  The belief might be in the mind, but if the mind is located throughout the body, the concept of ‘mind’ needs to be expanded. It can no longer be confined to the brain or the intellect if it co-exists in every cell in our body. The word Somatics was coined by Dr. Thomas Hanne, the founder of Somatic Movement Education, to encompass this expanded definition.  The word ‘Somatics’ goes beyond the concept of ‘body’ and ‘mind’. It refers to the awake, alive, breathing, thinking body that encompasses the mind.

What integrates the body-mind represents the modern quest for the Holy Grail. Some people believe the answer is in the emotional body, some in the spiritual body and others in the physiological body. In Somatics, we see breath and movement as key links in the chain.

The beauty of a body based movement approach is that the body is immediate and tangible. It is always directly accessible. To feel, we simply tune into the sensations occurring right now. When we don’t, pain or discomfort signal us when something is not right. As my dear teacher Donna Farhi says, ‘Pain is the body’s way of saying find a more skilful pathway’. In addition, by tuning into the body, we tune into the elusive present moment. This is what yogis have been doing for 5,000 years. This alone has a quieting affect on the mind, as it cannot be ‘futurising’ or ‘past-tensing’ while in the present moment.

We all have deeply ingrained habits and thought patterns. A thought that is held and repeated becomes a belief and belief becomes biology. Our beliefs go much deeper than our thoughts and cannot simply be changed by willing them away. Most beliefs are completely unconscious and not readily available to the intellect. And, they don’t come from the intellect alone. They come from the other part that, in the past has become lodged in the cell tissue.

Specific breath and movement work allow us to change our biology and repattern our thoughts as we release the held memory in the cell tissue. Lightness can then come into both the body and the mind simultaneously.  We do not necessarily even need to understand what is happening in our bodies in order to be able to respond to it. All we need to do is to allow. Often, the understanding comes with time as our inner compass guides us back into balance.

This site uses Akismet to reduce spam. Learn how your comment data is processed.